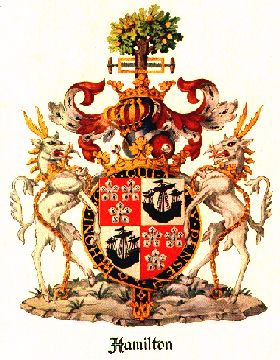 A tray presented as a Christmas gift to a member of our family in 1934 bears the Hamilton Arms with the following inscription:

Other sources offer similar versions of this story. The Clan Hamilton Society states that one Gilbert de Hamilton praised Robert the Bruce in 1325 and was assaulted by John de Spencer. Hamilton challenged his assailant, but de Spencer refused to fight, whereupon Hamilton killed him. The version in our family is certainly more chivalrous!